The platform is implemented in C# and Microsoft .NET Framework 4.0-4.5, it use Microsoft SQL Server 2008 R2 and higher versions as a database management system, including support for all free versions of Microsoft SQL Express.

eLeed platform has a 3-tier architecture and consist of DBMS, server and client sides. The application working on the end user’s side (client side) interacts with the application server, whereas the application server when necessary interacts with the database server (MS SQL Server). The usage of application server allows for concentration of execution of the most complex by volume operations on data processing. For example, during the execution of even the most complex requests the program that resides on the end user side will receive only the necessary fetch of data, whereas all of the intermediary processing will be performed on the server. Physically the application server and database server can reside either on the same or on different computers. This architecture allows to significantly increase the performance of the program, the users can perform various operations much faster. In addition, this architecture allows to significantly decrease the costs of an organization on software applications, because with 3-tier approach high technical requirements are applicable only for server, whereas the workstations do not necessarily have to have high technical characteristics, and subsequently can have a low cost.

platform usually employs the capabilities of MS SQL Server for efficient fetch of information:
-query mechanism is oriented towards maximum utilization of MS SQL Server for performing calculations and report generation;
-viewing of large dynamic lists is provided without having to execute a large number of database requests; -at the same time the user is provided with capabilities for efficient search, as well as customization support for selection and sorting.

Support for multi-thread user interface – each window in the system is processed in a separate thread. The user does not have to wait for completion of long operations, it is possible to cancel the execution of some task or to switch to another task, by working in other program windows. For example, an employee needs to generate a complex report in the specified time period. In this case the user is not going to waste time while waiting for the generated report and the response from the system, he will be able to continue working in another window.
There is another unique feature – support for “smart” or separate locks. The documents that work with distinct accumulators can be transacted simultaneously in the system, because distinct accumulators will be locked in such case.
eLeed v3 contains a powerful and flexible mechanism of support for development and generation of reports. Builder contains a convenient designer for rapid development of reports of various degree of difficulty. The scripting object for work with reports there are several methods that allow for export of reports into various formats, including XML and HTML. It will allow for rapid development of reports of various degrees of difficulty and a for quick change of the logic of the existing reports with subsequent output in the way of Web interface to end users and analysts.

The diagram below shows the high-level architecture of the eLeed platform: 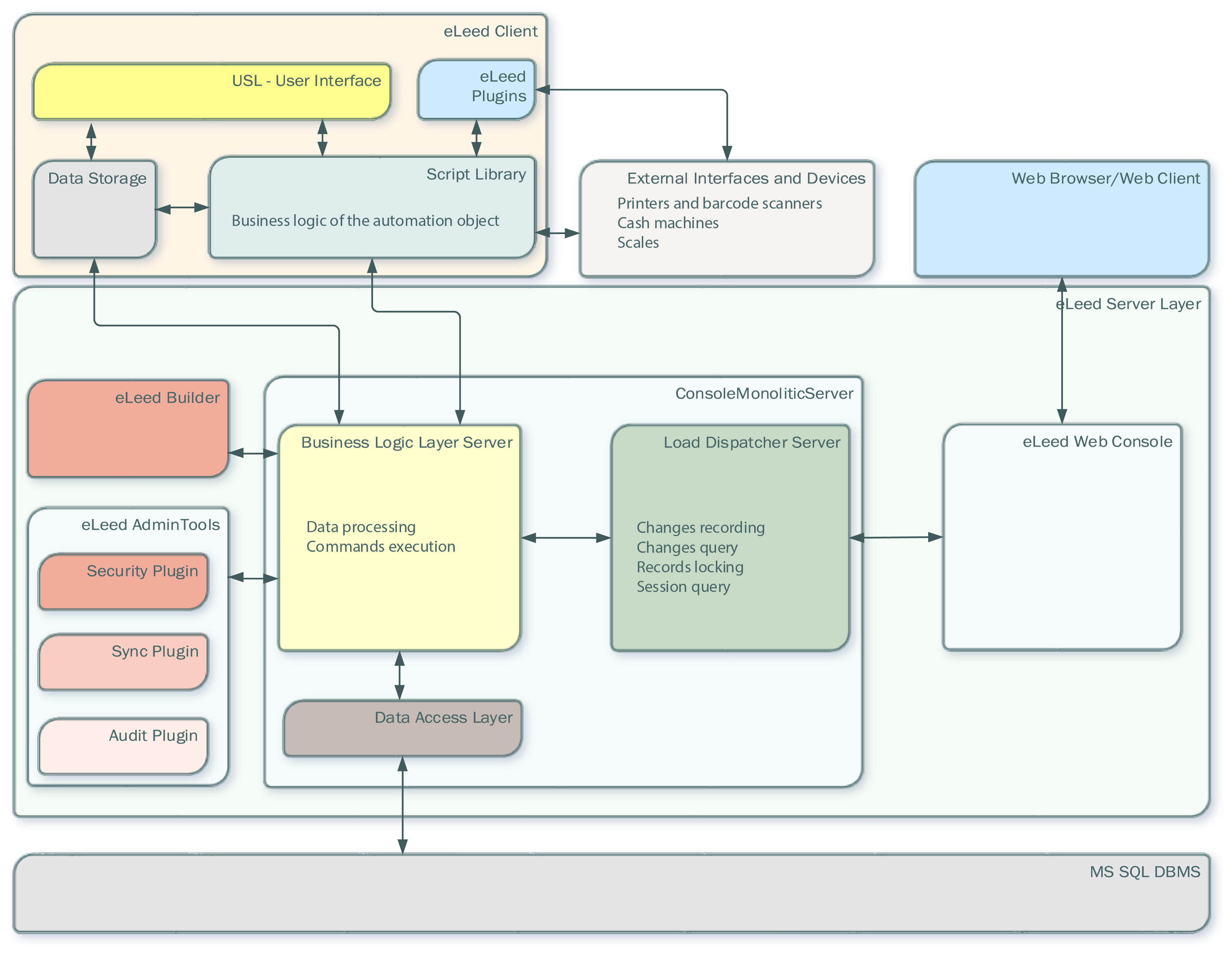